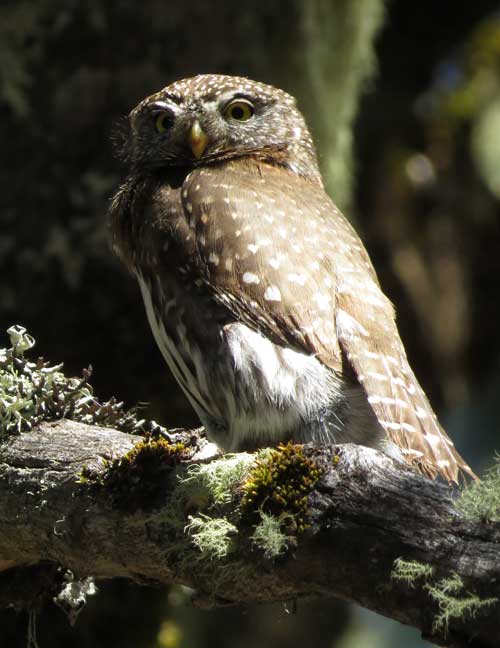 I glance up haphazardly thru thin trees, binoculars in hand, looking for winged activity. My eyes meet a fierce stare only a few feet above me. I freeze in place hoping to not cause this little hunter to flush. Two small golden eyes, surrounded by spotted feathers forming a disc shape on either side of a pale hooked beak, are the features I notice immediately. How long have you been watching me, I ask myself? Like so many forest dwellers I’m certain its detection is easily ten-times my own and has in all likelihood noticed my fellow bird surveyors and me for some time already.

I whisper to the others of my discovery and they slowly move in for a better look. The small bird rotates its head towards the new onlookers without body movement in that manner which all owls are capable of — a motion often mimicked in movies by aliens or possessed people but never as gracefully executed. It views us with disregard, perhaps even some contempt as if to confirm who has the upper hand and rules the forest.

This is the Northern Pygmy-owl, one of the smallest owls in North America, standing on average 6.5” tall and wing span 15”. It is diurnal and feeds primarily on songbirds in coniferous forests. A very aggressive hunter, it will search for prey in tree cavities as well as snatch birds in flight or on the ground. In case its hunting prowess were not enough its “false eyes” feather pattern on the nape keeps all prey edgy and on alert as well as deflect its enemies.

I slowly back away for several yards, then sprint back to the truck for my camera. A “life list” bird for me, I don’t want to miss this chance to get some photographs. I run back into the forest with my camera hoping the owl would still be perched. I stop short of my original position to relocate the bird. It had not flown and I snap several close-ups, grateful and amazed at my luck.

Zoomed in I notice its feather pattern more so — in profile I see tiny feathers protruding between the eyes and beak. Its rusty dark brown plumage resembles the bark color of incents cedar. But it’s the false eyes that really capture me. Unlike the wide and round real ones, these black and white feathered patterns are narrowed and angry. Both pairs seem to be constantly searching, watching, scanning; this pint-size predator transfixes me. 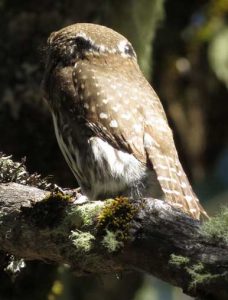 It is these encounters that draw me to this important biological work season after season — there is magic, inspiration and rewards beyond words.

5 thoughts on “Eyes Upon Me”